Here is a quick note on conditions. As calendar winter approaches people may be considering a winter attempt of the summit. A ranger went up to Camp Muir today to have a look at condition on the upper mountain.

We have had unseasonably nice weather recently and this has not done the mountain much good in terms of climbing conditions. The rain event that started on Thanksgiving was warm enough to have that rain go all the way to the summit. This produced a think ice crust all over the volcano. A few storms coated the mountain with more snow and covered the ice but the recent high pressure and windy conditions have scoured the snow off the steeper slopes. That has resulted in large patches of exposed blue ice over much of the upper mountain.

Some photos from the Muir Snowfield and Camp Muir.

So for now the upper mountain would be extremely difficult and hazardous to climb. Even moving around Camp Muir requires crampons. The weather pattern is shifting though and we expect more snow to start arriving on Friday.
Posted on Wednesday, December 13, 2017

An avalanche was reported to have been triggered by two unidentified snowboarders on December 5th. The avalanche was large and could have easily buried and killed one or both of the parties. The avalanche occurred on a west-facing slope near treeline on Panorama Point. This area is easy to reach from the Paradise parking lot and is frequented by backcountry skiers, snowboarders and snowshoers.

One of the snowboarders was witnessed to have been swept into the avalanche and was deposited on the surface of the debris. The other snowboarder was not caught by the avalanche. Thankfully both parties were, apparently, uninjured and were able to self-rescue.

By the time rangers visited the site the following morning the avalanche path was reloaded with fresh wind slab and the debris pile was mostly covered with wind deposited snow. 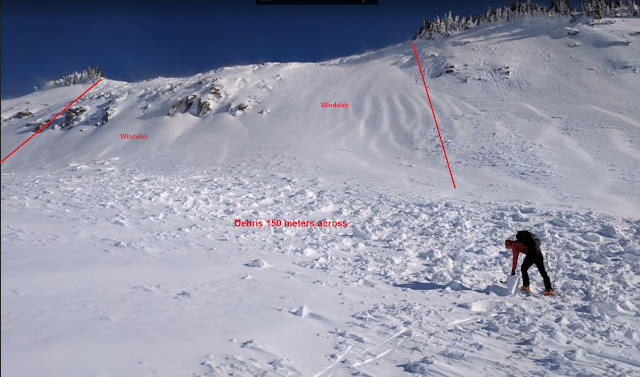 The Avalanche Forecast that was issued for December 5th came out at 6:00 PM on Monday, December 4th. The Avalanche Hazard was listed as:
That may sound like a fairly benign hazard to many people, so how is it that a large sized avalanche was triggered on a day such as this?

The first thing to consider is that approximately 30% of avalanche fatalities occur on a day where the hazard is listed as Moderate. If you look at the definition of Moderate Hazard in the North American Danger Scale what you'll read is this:

It states that heightened awareness is necessary and there is the possibility of large avalanches in isolated areas and that it will be possible for humans to trigger them. So how could this slope have been avoided using the forecast? Let's take a look at what was said.

The very first thing written was:

The Bottom Line: There is less confidence in the forecast above treeline, due to limited observations. Travel with more caution if venturing to higher terrain due to recent heavy storm cycle loading through Saturday where wind and storm slabs may need more time to heal.

So already we know that large avalanches are possible and that more caution is needed when travelling in 'higher terrain'. If you were planning to venture above treeline in Mount Rainier National Park that would qualify as higher terrain.

If we look at the Detailed Forecast there were two very pertinent lines.


Fair weather with gradual warming is expected Tuesday with gradually increasing easterly crest level winds.
Watch for areas of wind transport and fresh wind slab deposits if easterly winds increase above forecasted.
Now we know that we will need to watch out for areas where wind, from the east, will deposit snow especially at higher elevations and near ridge tops and that we should be even more cautious if the winds increase more than expected.

In hindsight we can see that the 'incresing easterly' winds deposited 'fresh wind slab' onto the west-facing slopes on Panorama Point right at treeline and so this isolated terrain feature was primed for a large sized avalanche. Unfortunately someone ventured onto that loaded slope and triggered an avalanche. Fortunately they were able to escape injury or worse.

This close-call can serve as a lesson for everyone and a reminder that Moderate Hazard still requires cautious decision making and appropriate terrain choices.
Posted on Wednesday, December 06, 2017