After a few good punches of cold precipitation skiers have begun spooling up for winter. The parking lot at Paradise has been filling up earlier and there's a lot more cars with ski racks and cargo boxes. Tales of skiing from Camp Muir all the way to Paradise have also been popping up online.

At the tail end of the big snow dumps we experienced a pretty good atmospheric river event with lots of wind as well as a lot of really warm precipitation. That event looks like it triggered a decent avalanche cycle from approximately 7,500' to 8,500'. The evidence that there was instability in the snowpack should serve to caution the early season go-getter's. It's not the worst idea to start your season out nice and slow and keep the terrain choices conservative.


The cycle has subsided now and in the past few days the sun has come out and temps have turned unseasonably warm. This has resulted in some nice corn skiing conditions on the Muir Snowfield. Today (Saturday, October 28) a ranger counted 72 skiers on the snowfield along with several hikers and snowshoers all taking advantage of the nice weather.

There is patchy snow from just above Paradise but the continuous snow does not start until above Pebble Creek (7,200') and so walking up and down from there is pretty much mandatory. This makes your footwear strategy hard to figure out. Running shoes or light hikers would be great to carry up but the trail is muddy, full of puddles and the snow patches are slushy. Low top shoes will get soaked. Hiking or climbing boots will keep your feet drier, of course they're heavy. The last option is to just walk in your ski boots but that is really tough on the feet and can put a lot of wear and tear on the gear. All three techniques were in full display on Saturday.

Above Pebble Creek the snowfield is fairly smooth with just a little wind effect here and there. The best skiing is between 10,000' and 8,000' with the lower stuff not freezing well overnight and staying slushy. The road will be open 24 hours a day until the next round of storms forces us to shut it down so take advantage of the ability to get an early start. It's probably best to start your descent before 1:00 PM to get good snow conditions. The late afternoon snow could be pretty tough to ski/board on.


Just a note on climbing and skiing on the glaciers. With a light coating of snow and freezing levels at 14,500' this might be the most dangerous time of year to attempt to go for the summit or even get out on the lower glaciers. The crevasses that were wide open and obvious in September are now thinly veiled with a cover of slush and anyone choosing to climb or ski out on them is taking on a high degree of risk. It's a better idea to get your ski legs in shape on the mellower, non-glaciated slopes and let the mountain recharge with lots more new snow.


Have fun and be safe! 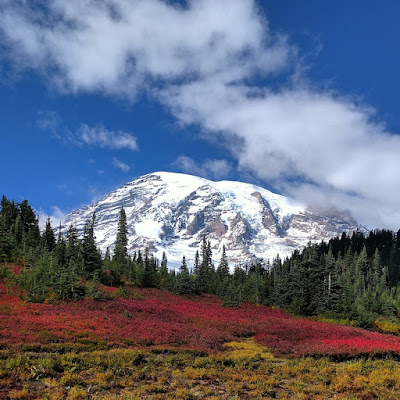 The colors of fall have arrived at Mount Rainier.  With the change in color on the lower slopes comes change up high.  All of the climbing guide services on Mount Rainier have finished their summer operations and high camps are closed for the season with only occasional visits by the rangers.  Winter storms have blanketed the mountain with a thin layer of snow covering large crevasses and drifts forming hazardous cornices.  Climbers can expect very challenging, if not impossible, route conditions on the standard routes with the potential for dangerously cold and stormy weather.  Even day hikers and backcountry riders need to use extra caution.  Endeavors into the Mount Rainier Wilderness this time of year are much more serious adventures.  Always carry extra warm clothes, technology to navigate in a storm, and have a contingency plan.

Check the Mount Rainier Recreational Forecast before leaving for your trip.  Remember that there's no gate that closes when the weather gets too rowdy - you have to make that decision for yourself and your team.

Both the Longmire and White River Ranger Stations are open through October 9th.  Check out the park's Operating Hours Page for more info on seasonal closures.  Also, as the snow line continues to fall, the passes in the park will begin to close for the winter.  The park's twitter feed announces all the latest news regarding roads in the park and there's a Road Status Page that catalogues all of the changes throughout the year.