During our recent spell of high pressure a group of local climbers made a rare winter ascent of the Tahoma Glacier and ski descent from the summit. Thanks to Doug Daniell for the report and photos. 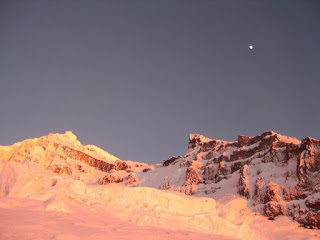 I climbed and skied the Tahoma Glacier with a group of four from Seattle on January 19-21. I wanted to share some conditions information and beta for a winter approach from the west side of the mountain. We began our ascent on the 19th from the Westside Road closure near the park entrance. We were able to skin from the car (~2150') although coverage was a few inches at best. We eventually joined Tahoma Creek and except for a few creek crossings found easy travel. Camped to the west of Glacier Island on a calm, mild night. On the 20th we skinned up on firm snow to the glacier, passed a few icefalls on the right, and then traversed left at 9K to a smooth ramp that led to camp at 10K. Enjoyed a beautiful sunset and alpenglow on the slopes above. 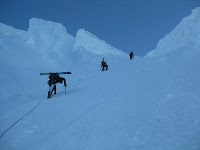 Sometime before 5am on the 21st we roped up, dropped down to the north to avoid some looming seracs, and then navigated crevasses and ice debris to the base of Sickle. We decided on this variation to avoid what looked like large swaths of glare ice on the main Tahoma. In the Sickle we found good travel on shallow wind-packed powder and firmer styrofoam, with patches of ice globs especially higher on the route. Beautiful Rainier shadow at sunrise though we remained in the cold ourselves. Brought pickets/screws but none were used. Definitely not a route to tackle with much avy danger - saw lots of evidence of sluffs and maybe a well-weathered crown or two. The rest of the way to the summit was a slog as usual. Great views from Jefferson to Baker, though the Puget Sound was covered in fog and clouds. 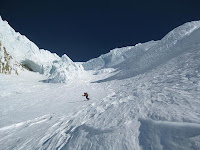 The ski down was a hodgepodge of snow conditions - terrible off the summit, some nice smooth patches below Liberty saddle, fun steep skiing through the Sickle, thousands of feet of wind-effect down the glacier, and then occasionally breakable crust down to the creek. Three of us completed the full descent and one had a major binding failure high on the route that entailed lots of walking and some improvised ski-strap solutions to get out by 10pm.


FYI, snowmobiles are allowed from the road closure on 410 to White River Campground, Remember to self-register before your climb or overnight stay whatever your route may be.
Posted on Monday, January 28, 2013

Winter on the Snowfield 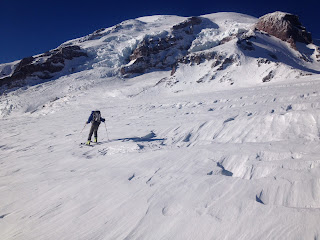 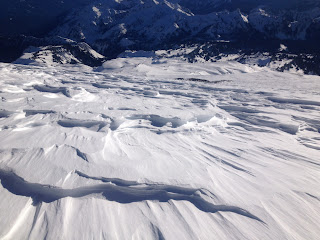 A strong high pressure system over Mt Rainier led to some incredible weather last week! It felt like summer up at Camp Muir, with clear skies and warm temperatures. Unfortunately the snowfield was hammered by consistent moderate to strong winds, causing significant transport of the relatively dry snow left by the last major storm. The upper snowfield and Cowlitz glacier were laden with heavy sastrugi. and thick sun crusts and ice layers were exposed in many areas, making uphill ski travel difficult at times. The lower portion of the snowfield (below Panorama Point) had heavier snow and was less effected by the wind, and was actually quite enjoyable  to ski.

Travel to Camp Muir can still be an enjoyable venture, as long as folks bring appropriate equipment to safely deal with the terrain, and are prepared for the harsh weather often encountered during the winter. Ski crampons or a set of light weight boot crampons would have been nice for getting to Camp Muir. If you expect to make use of the public shelter at Camp Muir, be prepared to spend time digging out the doors, as they were nearly completely buried by drifted snow when we arrived. Do not count on other parties to have dug them out recently, and certainly bring at least one sturdy shovel.

In addition to creating heavy sastrugi on the snowfield, the winds and heavy sunlight last week created significant spacial variability in the snowpack around Camp Muir. Some ridgelines had been scoured nearly to the ground, while others had generated large cornices, like those typical of the east side of the snowfield during the winter and spring. A few large wind pillows were noted along the ridgline above Camp Muir heading to the Beehive and Gibralter Rock, whereas other areas of the upper cowlitz were scoured down to last year's snow. We dug a snow pit above Camp Muir, and although we found no major red flags in the snowpack, the huge spacial variability in the area makes it difficult to draw any reliable conclusions about the overall snow stability. If you are going to venture up to Camp Muir and beyond, always get a detailed weather and avalanche forecast before you leave the trailhead, but also know that these forecasts are not an adequate replacement for good observations and decision making. Be prepared to make your own assessments about the safety of the terrain you are traveling in. Oh, and please remember to register for overnight trips so we know you're up there.

Have a great winter, get out and ski, be safe. 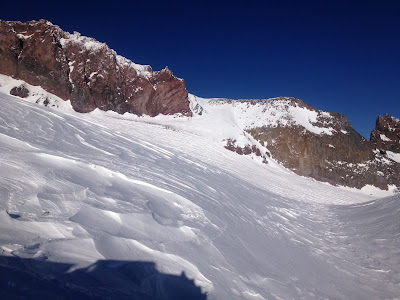