Winter has Come Roaring Back 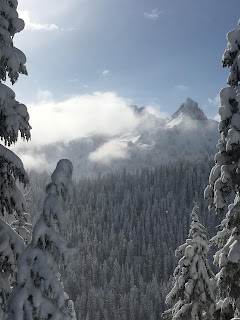 There was a time frame there where I think most skiers and snowboarders in the state were getting a little worried that winter had decided to pack up and call it a season. However, winter has come back strong the past week or so. We have been getting steady snow almost daily here at Rainier for almost a week. And it has been coming in cold and fluffy!

With the weekend approaching, it is looking like there is yet another big storm taking aim at the Cascades, and Mount Rainier. There is a winter storm warning in affect from tonight until early tomorrow morning. So if you are planning to come up to the park be prepared for winter driving conditions, and be patient with the plow drivers and the road opening times. They do a ton of hard work to keep the road in good shape all winter! Also, don't forget to throw in your tire chains, as all vehicles are required to carry them in the park this time of year. Now, with all the logistics out of the way, we can talk about the snow and skiing/riding conditions!

Climbing rangers were out in the Paradise area on Thursday to assess avalanche and snow conditions. They found quite a lot of new snow (about a meter, or 3 feet for you non-metric folks!), sitting right side up on top of a prominent crust from February 13th. This all sounds pretty good, however, on top of that crust is a layer of facets that are causing the potential for deep instabilities. The layer appears to be stubborn to trigger since it is so deep in the snow pack here at Rainier. However, this layer may present itself closer to the surface depending on the location and aspect. Long story short, there is certainly a sleeping dragon down in the snow. But, the good news, it is getting deeper by the day and the facets that were observed were trending towards rounds. But this problem is still out there, and if triggered, has the potential to go very large.

With all of this in mind, the climbing rangers chose more conservative terrain to ski, and found excellent ski quality on moderate angled slopes, some of the best turns of the season perhaps! So it is definitely worth the trip up this weekend to take advantage of some Utah or Colorado type snow in the Cascades. Remember to check the park's social media pages (links on the right side of this page) for the latest road conditions as well as NWAC for the latest on weather and avalanche conditions.
Posted on Friday, February 23, 2018 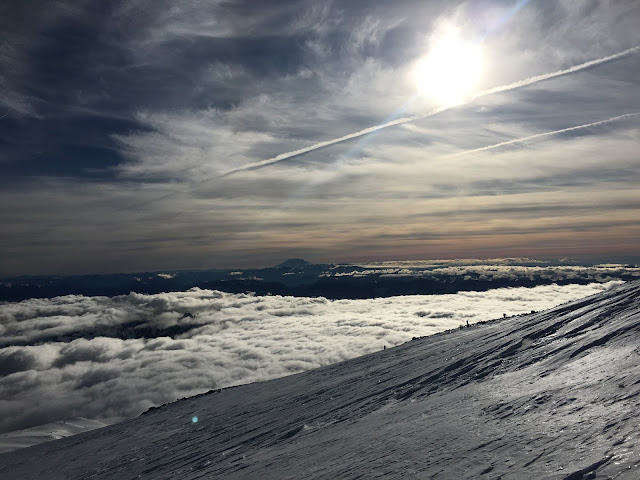 Over the weekend people were out in force around the mountain. While the skiing conditions were not so great, the weather was fantastic. And I think a lot of folks from around the Northwest needed a good dose of sunshine.

Climbing rangers were out and about and up at Camp Muir over the weekend and found a wide variety of ski conditions, from breakable rain crust, to light, cold snow on top of the crust, to wind scoured ice. Ski crampons were a near necessity for the majority of the journey to Camp Muir. Many people had taken their skis off and were wearing boot crampons. There was certainly some better turns to be found on leeward aspects where snow had been deposited by the wind instead of scoured away, but these spots were few and often times far between. But this weekend was more about enjoying the sunshine and the views of the mountain than ski quality!

The overall snowpack on the upper portions of the mountain, including Camp Muir, appears to be fairly low for this time of year. For those of you familiar with Camp Muir, the rocks that form the helipad in camp are currently melted out and exposed. As are nearly all of the structures, with the usual wind blown snow around them of course. The route across the Cowlitz Glacier looks to be filled in, but  Cathedral Gap still has several bare patches, and rocks popping out. From what rangers could see, the upper mountain appeared to be in a similar state, with large sections of exposed ice and scoured snow. The Gibraltar Ledges route appears to be well filled in, but looks more like it typically does in May, as opposed to February!

If you are planning a trip to climb the mountain, this may be the week! Just be aware that conditions may be quite firm and icy up high. And be prepared to have the upper mountain all to yourselves, with no established route or wands this time of year. When the weather is nice this time of year, it can be a true wilderness experience on the upper mountain, and teams need to be self-sufficient! Don't underestimate "the standard routes", which become a little more involved when there is no shoveled boot track, wands, or other parties on the route. It is a good idea to come prepared with a GPS that has pre-loaded way points, and gear to spend an unplanned night on the upper mountain in the event of an emergency. All of that said, when the weather is nice in the winter time, Mount Rainier can be a great place to recreate, so maybe consider taking a day or two off work and coming up to play!
Posted on Monday, February 12, 2018

Sunshine in the Forecast!

Well, for all the skiers out there it has been an up and down winter so far. Lots of big snows, followed by some big rain events. Such is life with La Nina! However, this weekend looks to be a sunny one at Mount Rainier National Park.

The forecast is calling for a cooling trend, with a sunny day on Saturday and maybe some "filtered" sunshine on Sunday. If you are in need of some vitamin D, grab your skis or snowboard and come on up to the park. The recent rains and warm temperatures at Paradise have settled the snow pack a bit, making for relatively stable avalanche conditions, which are expected to remain similar through the weekend unless something drastic changes in the forecast. With that said, it will still be a good idea to avoid steep slopes that will be in the sun. While the cool temperatures should certainly help, the sun has strong effects on the snow, even when it is relatively cold outside. Many of the cornices that developed over the last storm cycle have also been gaining weight from the rain, so avoiding slopes with cornices above will also be prudent.

It may not be a powder weekend, but it is always nice to get outside to ski, ride, or snowshoe in the sunshine. Grab your avalanche gear, a partner, and some sunscreen and come up to the mountain! Make sure to check the park social media pages (Mount Rainier Twitter Feed), website, or this blog to find out the most up to date road opening and closing information for the weekend. And if you see one the snow plow drivers thank them for their endless hard work! Without them none of us would be able to enjoy Paradise in the winter months.
Posted on Thursday, February 08, 2018