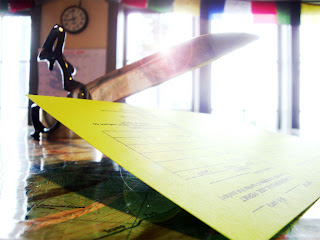 Come to Rainier and see the "Biggest scissors you’ve ever seen.” It’s true. More people are impressed by these scissors than they are with the flowers, glaciers or the entire mountain! The conditions are excellent up here and after being inspired by “The Scissors” many climbers summited in the last week.
We’ve had a few wet and cloudy days down low lately, but the upper mountain has remained nice. The freezing level has stayed around 11,000' and is forecast to drop to 8,000' early this week, followed by high pressure and warmer temperatures.
As for general route beta, we would have used our scissors to span the crevasse pictured below, but instead there has been a ladder placed across it. The crossing shown is around 13,800' on the Disappointment Cleaver route. The guide services maintain ladders and other fixed gear at times along the DC. Before using any fixed gear you find, take a moment to check it out and not just assume the other guy made it safe. 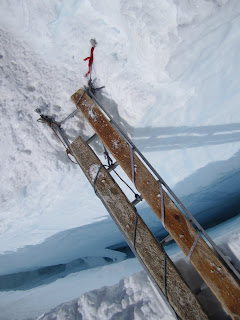 If you recall last year the lower sections of the mountain were already melting out and exposing bare ice. Not the case this year, which means you should be here enjoying these terrific late season conditions. Come see our scissors and then get out and crush it! 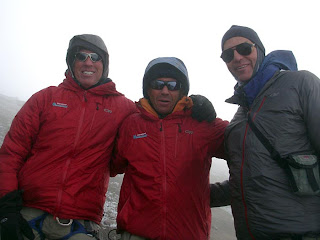 It has been in the works since 1975 and last week early on a Saturday morning, mountain guide George Dunn reached the top of Mount Rainier for the 500th time! He climbed with his wife Nancy, son Jeremy along with friends Phil Ershler and Eric Simonson.

On the way up they had to fight through some tough wind and lightning, but were able to push on to the summit, helping George break his previous record of 499 summits! This is by far the most anyone has ever climbed Mount Rainier and he doesn't seem like he will be slowing down anytime soon.

George has been guiding for the past 35 years and has led many climbing trips throughout the world. His knowledge of climbing and of Mount Rainier specifically is a great asset to all of us here. He is currently a co-owner of International Mountain Guides, one of three guide services that operate full time here on Rainier. Our congrats go out to George and his family on this terrific achievement.