After all that nice sunshine a few weeks back, old man winter has made a return to Mount Rainier National Park. Bringing snow and rain, even up to Paradise.
While this is certainly welcome in mid-January, it is both a blessing and a curse. While we are still stacking up needed snow pack, in the higher elevations, the storms we have been receiving over the past few days have been coming in fairly warm, meaning heavy snow. All of this heavy snow has been falling onto a weak layer of snow that developed last week, known as surface hoar. Surface hoar, once buried can create a persistent weak layer in the snow pack, meaning a layer prone to avalanches. Rangers have been out in the Paradise area, digging avalanche assessment pits, and noting that this layer has been fairly reactive to tests. This falls in line with what the Northwest Avalanche Center has been seeing and saying as well. In addition to this avalanche problem, loose wet slides have been occurring in the lower elevations, as the snow gets rained on. What does all of this mean? It certainly does not mean that there is not still fun to be had! It means that when choosing to come for a visit to ski or snowshoe at Mount Rainier, you should check the daily weather and avalanche bulletin before you come. And be prepared for all weather conditions, as well as with all of the appropriate avalanche gear.
On days that the road from Paradise to Longmire does not open, there is still plenty of snow shoeing and even ski touring that can be done out of Longmire. So come on up and enjoy the winter season in your park!

After relentless snowfall over Christmas week, the clouds have departed, leaving behind plenty of bright sunshine and snow! 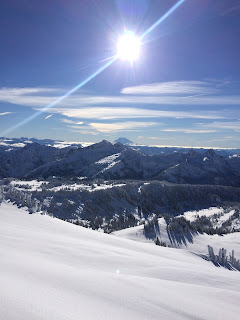 It appears that we have settled into a substantial high pressure system here in the park, with clear skies, cold temperatures, and relatively strong east winds. This pattern looks to be continuing through the weekend. The skiers, snowshoers, sledders, and snow lovers are have been taking advantage of the beautiful weather over the holiday weekend. Snow play, for those interested in sledding, is now officially open and has been a hit. If you are skiing, however, please follow the signs, and do not cross through the snow play area.

Rangers were able to make it up to Camp Muir earlier in the week as well. The conditions were highly variable, ranging from deep powder to glare ice, to breakable crust. The strong east winds have now blanketed much of the Paradise area with a substantial wind crust in many places. With that said, skiers and backcountry travelers should use caution. With high winds, and the soft snow available for transport, rangers noted wind slab activity on west facing slopes. There have been several, both natural and skier triggered, wind slab avalanches on west aspects over the past few days. The slab is ranging from 20-40cm in places, depending on the local aspect. And for all you avalanche aficionados out there, the slab is varying from 1F-P when looked at in an avalanche test pit. Rangers also found that when cutting blocks for a snow test, the blocks fractured when cut, before tests could be conducted. Take home message, use caution on west facing aspects, and have a shovel, beacon and probe. 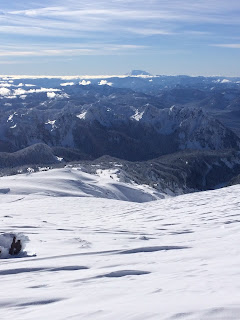 Come on up to the park to kick off 2016, and the National Park Service's 100th anniversary and enjoy some sunshine and lots of snow! As always, if you plan to camp or climb please come prepared for winter conditions and get a permit from the Jackson Visitor Center on the weekends. Or self register at the Old Station before heading out.
Posted on Saturday, January 02, 2016