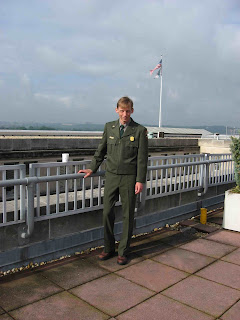 The National Park Service has finally decided to recognize Chris Olson and Dave Hahn with a valor award and citizen's award for bravery, respectively.

In 2002, Nick Giguere and I had been lowered in on a jungle penetrator from a Chinook helicopter to a serac just below Liberty Wall. We hiked up to just below Thumb Rock where the injured climber and their party were waiting for us.

The second helicopter brought in RMI guide Dave Hahn and Chris Olson, an NPS climbing ranger, to assist us with the lowering from Thumb Rock. As the helicopter was trying to land, it slid back on the snow, lifted off the ground for a short period while it spun around 540 degrees and crashed into the snow. It was one of the scariest things I've ever seen in 20 years of working for the park service.

The helicopter nosed in and lurched foreward. From 1500 feet above, the snow looked like it was spraying in all directions in slow motion. The main rotor bent down, touched the snow at mach speed, then broke with pieces flying off at 300 miles per hour in opposite directions. Finally the tail rotor broke off and swung around crashing into the main cabin of the helicopter.

Within two minutes, drenched in jet-A, and almost crushed by the transmission that came through the roof of the cabin, out jumped Chris, Dave, and eventually the pilot, unhurt.

There were no other helicopters available for a long time. Chris and Dave gave themselves a once over, and hiked up to our location. Since Dave was a guide, he took care of getting the rest of the party down the mountain. Chris's specialty is high angle rescue, so he took the position of litter attendant. Nick and I lowered Chris and the injured person in one long 1000 foot lowering.

Not often does someone crash in a helicopter, get out un-injured, and then take on a crucial role in a technically demanding high-angle rescue situation. It was truly amazing.

Chris and Dave will be honored in Washington, D.C. this week. Finally.
Posted on Monday, May 04, 2009