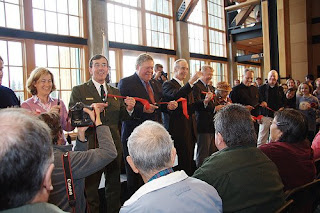 On Friday, October 10th, the second reincarnation of the Henry M. Jackson Visitor Center was opened to the public and dedicated to the highly regarded and revered Washington State Senator Henry "Scoop" Jackson. Funding for the original saucer-shaped visitor center (check out the image to the right - a distinct likeness of the

old JVC and a flying saucer taking off into space) was guaranteed much to his hard-work and dedication, so it was only fitting that the new visitor center also carry his name. Peter Jackson (the son of Henry Jackson, not the director) spoke at the ceremony, highlighting his father's love of wilderness, his desire to protect our country's most precious spaces, and to create enjoyable ways for people to learn from and enjoy these amazing places throughout our country and this state. The ceremony drew big-wigs from Washington (D.C. that is), including the Secretary of Interior Dirk Kempthorne, Representative Norm Dicks of 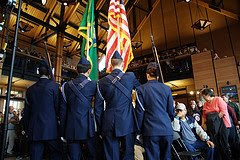 Washington's Sixth Congressional District, and the Chairman of the House Subcommittee on National Parks. Other distinguished guests included local Nisqually tribal elder Zelma McCloud, National Park Service Pacific West Regional Director Jon Jarvis, the aforementioned Peter Jackson of the Henry M. Jackson Foundation, Mount Rainier National Park Superintendent Dave Uberuaga, an elder representative from the Consolidated tribes and bands of the Yakama Nation; yours truly of course and another famed NPS persona, Mike (Gator) Gauthier, dressed to the nine's in his class "A" uniform, and several hundred other attendees at the ceremony. 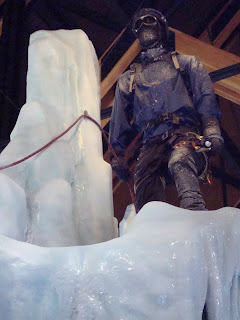 The new 'green', energy efficient JVC II is architecturally designed to match its surroundings and the historical park style, referred to as 'Park Service Rustic'. The feeling of the building when you first enter is dictated mostly by the space, due to the height of the ceiling and massive windows that line the entirety of the wall, naturally lighting the surroundings. However, it could also have something to do with the weird climber want-to-be mannequin placed high atop the climbing display. A feeling of comfort is there too. Above you are post and beam rafters, held together with cast iron fixtures and signs made from a menagerie of dark metal and wood. Overall, I was impressed and I think the sentiment was shared by most.
If you missed the grand opening, fret not, as you will have ample opportunity to view the building on weekends and most holidays, including the 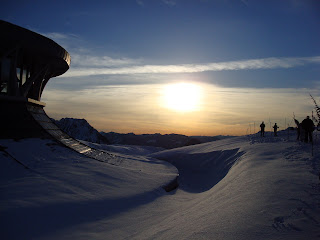 winter/holiday break from December 20th through January 4th. And as has been the tradition up at Paradise for many years, Ranger-led snowshoe walks will begin at the new JVC (snow permitting) on December 20th. The two public walks (12:30, 2:30) are approximately 1.5 miles in duration and last less than two hours and are moderate to strenuous. The walks are an amazing opportunity to experience the Park and Mountain in the wintertime. The adjacent photo was taken this past winter as I was returning from one of my group snowshoe walks - a beautiful view of the old JVC at sunset.
The opening of the JVC II means one more VERY important thing....re-opening our beloved Climbing Information Center (CIC) up at Paradise next summer. The CIC will function as it did before; climbing rangers staffing the desk will issue climbing permits and sell climbing passes, provide up-to-date route and snow conditions, weather forecasts, advice and as can only be expected from climbers (and NO ONE else) when they are awake and moving at 6:00 a.m. on a Saturday - perhaps some witty banter as well. See you all on the Mountain!
Posted on Tuesday, October 14, 2008