There's  been some great skiing on the Muir Snowfield this fall so far.  Between storms, and those 'tweens have been small, there have been some good snow conditions for skiing.  I last went up to Camp Muir on Friday November 2nd.  All those gargantuan suncups have been filled in.  Ski penetration has been pretty nice at less than 5 cm in most places so skinning up was fast. 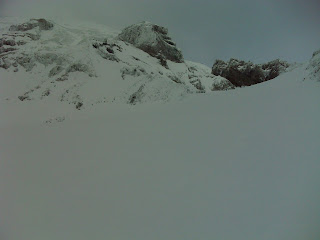 I've taken the webcam down for the season.  Although we did get it working again, it's just too much to maintain in the winter, so we'll save it for next season.

Public shelter is open, but it may be snowed in when you get there.  Expect to shovel out the entrance.  Could take a long time and you may be exposed to the wind while you're digging (and tired and cold)...

A toilet is open near the public shellter, which may need to be dug out, too.

Remember a few things this winter:
﻿     -Get a forcast from the NWAC before you go.
-If overnighting, remember a permit, a pass and to park in the overnight area at Paradise.
-Pack for contingencies, such as getting stuck out for an unplanned overnight.

We are definitely starting to see the summer slipping out of reach from our perch high on Rainier. A couple of days ago the weather brought a fresh dusting of snow all the way down to Pan Point, and while it quickly melted away it was a reminder of what is to come. (More Snow)

Besides the short snow squall, conditions on the upper mountain have been generally sunny and warm. Climbers have still been heading up the DC on a daily basis and with the hard and consolidated surface conditions more climbers have been making daytime and sunset climbs, saving headlamp batteries and keeping circadian rhythms more normal.

The Climbing Information Center will be closed during the weekdays but still open on weekends throughout September. Rangers will be on duty from 7am to 3pm Saturday and Sunday to register climbers and answer questions. When the CIC is closed self registration is in effect and all climbers are still required to register. The self registration box is located at Paradise in the hallway of the Climbing Information Center for the time being.

Check out recent updates on the Muir Snowfield and DC for the latest Beta before you come up. Conditions are still great for a hike and a climb, but there are a few things to watch out for these days, like more exposed ice and crevasses in unexpected places. Plan well, Have fun.
Posted on Thursday, September 13, 2012

Remembering the one and only Ted Cox!

Last Sunday Mount Rainier National Park and the Rainier Climbing Community lost yet another long time friend. The following is from our Chief Ranger Chuck Young and former climbing ranger Mike Gauthier. Thanks Guys. A memorial service honoring the life of Ted will be held this coming Thursday, August 16th around 6 pm at the Community Building in Longmire, WA. Everyone is invited to come and help us celebrate the life of our friend. It is a potluck so along with stories bring some food and beverages to share. If you would like more details about the location or event please email us, we will try to be timely in our response. 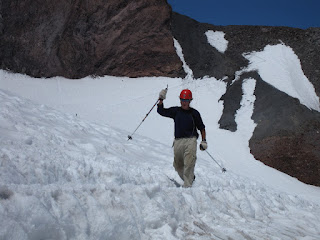 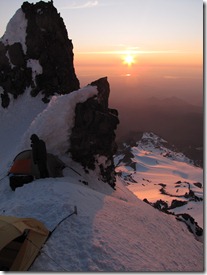 Last weekend we saw a tremendous number of climbers heading up Mount Rainier and lots of folks just out for a day hike, picnic at Muir or getting some rather great mid-July turns in. Most routes on the mountain seem to be staying in great shape thanks to a cooler and wetter than average June.

July is one of the busiest months for climbing on Rainier, but those seeking more solitude should try for mid-week climbs on the popular routes, such as the DC and Emmons, or head out to some of the more remote west-side routes that are still in good shape. Also many thanks to the climbers who have been helping keep the routes and high camps clean during this busy time of year. We really appreciate your efforts.

Check out a couple of great trip reports sent to us by contributing climbers Bartosz Paliswiat and Scott Seitz on Sunset Ridge and Success Clever, respectively. The photo at right was also taken by Paliswiat. Guess Sunset Ridge got its name for a reason!
Posted on Wednesday, July 18, 2012

We want to take a moment and honor Nick Hall.  Nick always showed up ready to give his all - not only at work, but at play too.  Nick Hall came to our program as a mid-season emergency hire in 2009 when our climbing ranger program undertook a big transition.  His calm demeanor and dry sense of humor kept even the most serious issues manageable.  Spending time as a Marine Corps Avionics Specialist, Stevens Pass Ski Patroller (SPKA), and hunting in the great Methow Valley, Nick had a rich and varied lifestyle.  Nick's dog Grommet even had a hard time keeping up with all his changes!  One day he'd be in the hot desert climbing and the next he'd be back-country skiing with friends.

Nick served four years as a climbing ranger at Mount Rainier National Park.  He moved quickly from a capable team member to leading climbing patrols and an entire shift of climbing rangers.  His passion for the outdoors, skiing, and climbing showed while he was at work.  Patrolling with Nick meant good food, mind boggling jokes, and of course rad terrain.

Climbing came naturally to Nick.  He spent as little time as possible in the city (for locals: to get to Issaquah from Longmire - he'd drive through the east-side to get there).  Granite and basalt columns were Nick's playground.  Living out of the back of his truck he avoided suburban areas and flourished at local crags, big-wall hangouts, and took the occasional trip to Yosemite.

The deliberate lifestyle choices that Nick made inspired his friends and co-workers.  His willingness to step up to challenges, try new systems and techniques first, and state exactly how he felt set the bar high for all of us fellow rangers.  Nick risked his life to help others numerous times as a ranger at Mount Rainier.  Never careless, he purposefully went about his job of alpine guardian with finesse and style.

These are a few links for articles regarding Nick... the Seattle Times Rainier Rescue, Last Rescued Climber Leaves Mount Rainier, and Last of Four Rescued Climbers Leave Mount Rainier.  In the next few days as this tragedy progresses we'll be focused on Nick and his family.

﻿Last week was quite the occasion for avalanches. The pictures below are of some crowns that are still visible from activities on February 21 and 22. Good visibility yesterday allowed full views of the crowns. There was widespread avalanche activity elsewhere on the mountain as well as in the Tatoosh but many of the crowns have been altered by erosion. 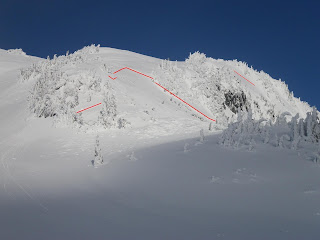 Just below Panorama Point. The alternate/winter route experienced some activity. 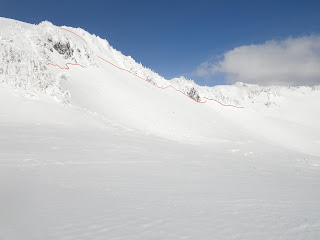 Taken from the saddle of the Edith Creek Drainage below Panorama Point. Most of the upper Edith Basin is now covered by avalanche debris. 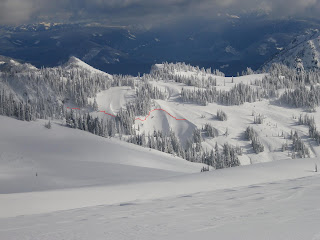 Another view from the saddle looking down at Mazama Ridge. Debris from slides off Mazama Ridge also swept the Paradise Valley road in several places. 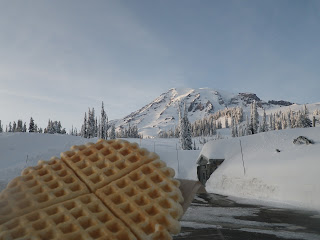 I hope your Monday was as good as mine. The forecasted 6-9" of new snow for tonight has started.
Posted on Tuesday, February 28, 2012 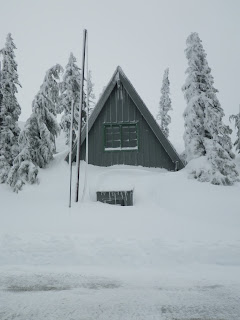 Winter is alive and well up on The Mountain. Pit profile coming soon.
Posted on Thursday, February 23, 2012

Six inspiring climbs were nominated for a 2012 Piolet d'Or over the weekend. Ranging from Kyrgyzstan to Argentina, climbers were getting it done! Check the award's website here for more information/inspiration. Snow is still accumulating at Mount Rainier, with just over 12 feet on the ground at Paradise. Keep checking the weather websites for the rare but glorious sunny breaks in the weather. Winter climbs, though challenging and rarely resulting in the summit, can be great training for climbers looking to summit in the summer. Make sure to check in with rangers before any climb or overnight adventure. Local knowledge is priceless when trying to get out and have fun during the "off-season." Watch out for a significant winter storm this weekend. The importance of knowing weather and avalanche conditions cannot be over emphasized. Keep up to date!
Posted on Friday, February 17, 2012 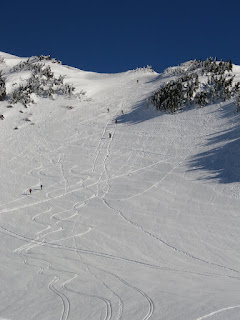 Some of the nearly twenty people that headed up to Panorama Point today
If today was any indication of what Saturday and Sunday are going to be like, Paradise is going to be a happening place. 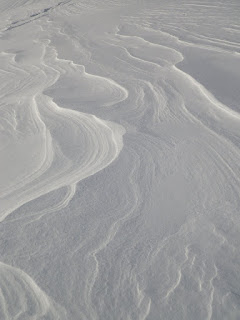 Wind Crust above Paradise
With blue skies have come strong winds (20+ mph at Paradise, with reports of people being blown to the ground higher on the mountain).
Be prepared to be chilled and remember to pay attention to your surroundings. The current wind is coming from the east instead of the usual west and is thus redistributing some of the snow pack. Combined with the sunshine there is quite a crust forming.
Posted on Friday, February 03, 2012

Weather conditions for this weekend are looking fair. Snow and rain showers are expected to return to the area Saturday night. In the meantime expect some chilling winds and blue sky.

The mountain is as dangerous as it is beautiful, start early, come prepared.
Remember to register if you are camping or going above 10,000 ft.

A storm cycle moving through the northwest over the MLK Day weekend will bring some much-needed powder to the slopes of Mount Rainier. The park was reopened to the public on the 6th of January following a terrible tragedy. Registration and climbing passes can be acquired at Paradise before heading out. Because there is no climbing ranger on-duty to help climbers through the registration process, please take a moment to read the registration rules here. Also, be prepared for severe winter weather. We offer a list of online resources here.

We hope you have a great holiday weekend - see you on the slopes!
Posted on Saturday, January 14, 2012